You can tell a lot about people from their social media presence. Lisa Taddeo’s Twitter account started in 2016 and in 111 tweets/retweets, 90 percent are dedicated to promoting her current book, “Three Women.” Here are two of her most recent promotional tweets as of this publication date:

(Author’s note: Within minutes of posting about factual inaccuracies in her upcoming book, she blocked me from her Twitter account) The marketing machine is in full swing for this novel, which publishers dangerously promote as “nonfiction” and “journalistic” despite glaring examples to the contrary.

In public, Taddeo is attempting to walk the fine line of promoting this story without mentioning specifics that could incriminate the book’s questionable authenticity. In an NPR interview with Sarah McCammon (@sarahmccammon), Taddeo says the accuser had “an entire community, not believe – not only not believe her, just not listen.” This interview was edited multiple times- the final edit removed McCammon using the term “statutory rape” with no attempt to clarify from either party.

Even after all the edits NPR executed to sidestep around the truth and keep the promotional bandwagon moving forward, the interviewer is still left saying, “you tell the story of her relationship, she again is an underage high school student, she has a relationship with her teacher who’s in his late thirties.” At no point does Taddeo correct this false claim or McCammon use the term “allege.”

Her flowery language in the book is also a clear attempt to sensationalize false facts for profit. It has come into question, such as this NY Times review by Parul Sehgal, where the writer points out “the language of the book is so inconsistent, full of odd homilies — an assembly line of truly terrible metaphors.” Taddeo’s language usage only reinforces her purpose of sensationalizing a false narrative with no interest in providing a window to the truth. (Note: Sehgal’s review has also not been shared or acknowledged by Taddeo, probably due to its critical nature.)

It’s a shame, really. The false accusations and incomplete investigation would have been a compelling story without the assistance of Taddeo’s fictional storytelling. Taddeo needed to embellish false facts to try to push book sales. She even explains her fictional narrative further in this Wall Street Journal Q&A with Maris Kreizman: 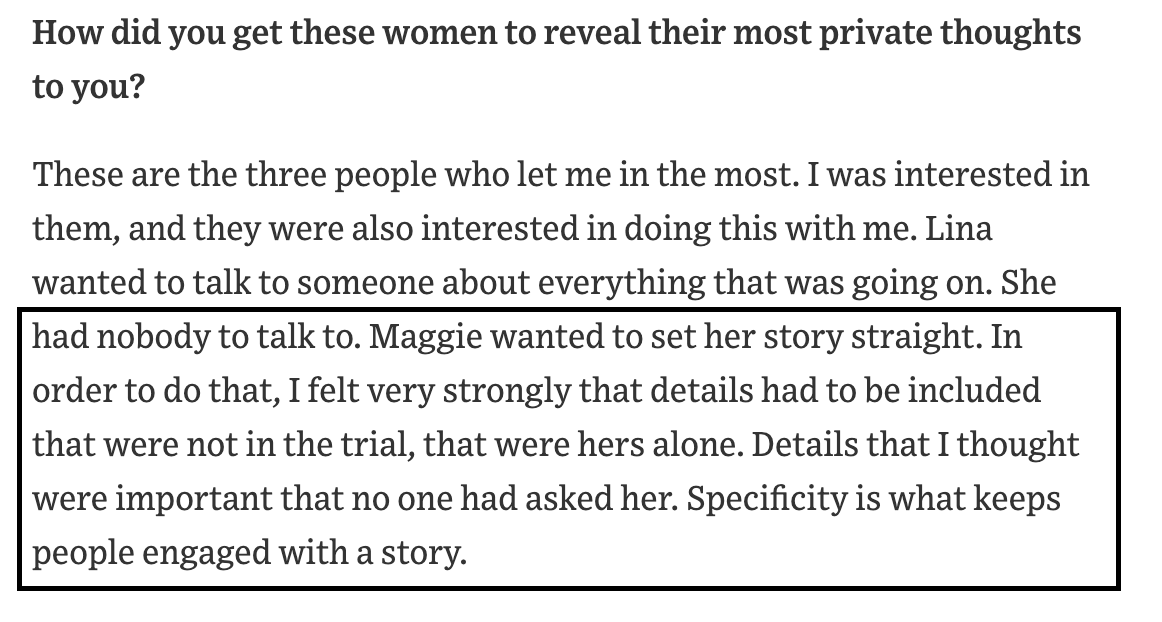 Now I would assume Kreizman is probably not a journalist (it’s obvious that Taddeo isn’t) because any real journalist would ask the following, “Why on earth would there be details left out of a trial where a person is charged with five felonies?” Mindful readers should immediately question the reason for relevant details to be omitted from an investigation and trial that spanned two years, only to be revealed by Taddeo in her book years later.

This tidbit from Taddeo herself should be all people need to know, and yet she still contradicts herself with regard to her true intent. The following image is from Taddeo’s own Washington Post promotional piece published July 3, 2019 (left) and a review from The Guardian published June 23, 2019 (right):

It’s not difficult to identify the discrepancies in her “interest” in this story. She softens her language in her self-authored Post article due to the obvious fictitious nature of her book.

Taddeo is not an author or journalist; she’s an opportunist. Much like a lawyer chasing an ambulance, she is only taking advantage of a story that garnered more clicks than any other in the region. It’s a story with a limited original audience so she wants to bring it to larger markets while pocketing the profit. It probably would have happened eventually due to the salacious content and courtroom drama, but Taddeo was just the first to sell out.

Stay tuned for:  “A sad attempt to appeal to the masses.”

Jeremy Murphy is a journalism and English teacher. This blog represents his observations from his professional growth in his 13-year career. In no way should this be mistaken for advice or any form of professional expertise. If you are looking for an expert in teaching, English and/or life, you are on the wrong site. You can follow Jeremy on Twitter at @mr_jmurphy or email him at jeremypmurphy@yahoo.com

One response to “Promoting pain for profit”